If ever there was a year worthy of a spectacular Black Friday promotion, 2020 is it! For the first time ever Outskirts Press is offering 5-times as many complimentary author’s copies with the Ultimate Black & White and Full-Color publishing packages!

This is a one-day-only Black Friday special, so order your publishing package right now, and lock in this deal with your Publishing Consultant or during check-out with promotion code: fivetimes.

When you’re ready to publish your masterpiece with the A+ Rated and #1-Rated self-publishing company according to the Better Business Bureau and Top Consumer Reviews, respectively, you may start via any of the methods below:

“Communication was swift and timely, recommendations were informed and helpful, and the publishing process overall was smooth. Mostly, it’s great just knowing I am working with a publisher who is handling the details to the point where the author doesn’t need to worry. Thank you once again, Outskirts Press!” – Eric B, author of Cult of Steiphen: Night Crusaders Series Episode 1

With so many options out there, it can be hard to decide where to publish your manuscript. But Top Consumer Reviews just made it easier to identify who you can trust. For the fourth consecutive year (2017, 2018, 2019, and 2020), the consumer product and services review site has named Outskirts Press #1 in the self-publishing industry!

There are many reasons Outskirts Press has garnered this honor multiple years in a row, according to TCR, citing a wide range of affordable products, a high level of customer service and our 100% royalties structure. To quote TopConsumerReviews.com, “Everything you could need from a self-publishing provider can be found at Outskirts Press. This company’s strong reputation, excellent range of packages and a la carte services are just a few of the reasons why they remain at the top of our rankings. Outskirts Press continues to be our top pick among self-publishing services.”

Now it’s time for you to experience for yourself the service that is #1 in the industry. Our Publishing Consultants are waiting to help you get what you need to achieve your goals for your project. Your dreams of becoming a published author are just a click away!

Yvonne Hilton is self-publishing a book with Outskirts Press, and wants your help deciding her upcoming book cover.

Peter has run away twice. This time the overseer on the large estate farm in colonial New York decides to use his cat-o-nine-tails on the slave to teach a more thorough lesson. His 12 year old apprentice, Martin Tucker is horrified, but grows to learn the useful application of whipping for the most serious offenses, like running. After all, he is the only white person on the place.
Sally is a 14 year old black girl newly arrived on the farm. Tucker, now thirty, chooses her to become his mistress. Sally is still a virgin when Tucker becomes her first sexual encounter. She however, already loves another slave, 16 year old Lemuel, with whom she’d grown up and who was purchased along with her.
Over the next few years, Tucker impregnates Sally with five babies in quick succession but none of them can belong to either him or her, since she is the property of the absentee owner of the farm and he is just an employee.
However, unbeknownst to the overseer, Sally eventually figures out a way to meet her lover Lemuel. And she manages to give birth to Polly, Lemuel’s child. The first five children resemble Tucker in coloring. Polly, on the other hand is dark-skinned, like her mother and father.

A dangerous situation has been created – how to hide the existence of this child from Tucker.

I was an assistant principal/supervisor of English. In my 32 years of teaching, my profession kept me constantly analyzing and dissecting literature, looking for the points of connection that made works come to life for high school students. Yet, for me, as a reader, it was always history, the events going on behind the narrative in a piece that held the real fascination. In 1972, I began to write short stories about fictional characters living during the eighteenth and nineteenth century. I began researching urban and rural slavery in New York with information from Dr. Sherrill Wilson, an urban anthropologist and learned about the actual day-to-day experiences of enslaved people during the 1700s. When this novel began to unfold in my mind, the lives of the people, as revealed by the excavations of the graves at the African Burial Ground motivated many of the events in the story.

(If a survey poll is not displayed above, please open this page in another browser to vote.)

This November we give thanks to the thousands of authors who have put their trust in Outskirts Press to help them achieve their publishing dreams. To show our thanks, we have a special offer to share. For a limited time, we will upgrade your publishing package for FREE!

In short, you’ll receive hundreds of dollars of extras! When you start today, we will also publish and distribute an Amazon Kindle eBook Edition of your book for free.

So, are you ready to publish your masterpiece with the A+ rated and #1-rated self-publishing company according to the Better Business Bureau and Top Consumer Reviews, respectively? If so, connect with Outskirts Press now in whatever manner is easiest for you:

“My experience with Outskirts Press was truly outstanding from the very beginning. All representatives were efficient, helpful, professional, and courteous. Outskirts Press made it easy for me to publish my first book. The finished product was a masterpiece! I highly recommend Outskirts Press.” – Introducing Diana McIntyre, author of Just a Piece of Me 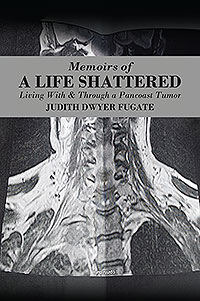 Memoirs of a Life Shattered: Living With & Through a Pancoast Tumor

Judith Dwyer Fugate’s “Memoirs of a Life Shattered: Living With & Through a Pancoast Tumor. “Being assaulted by a cruel and uncaring assassin: cancer. Numbness was my first reaction followed by fear, confusion, sorrow, anger, and pain. This intrusion had already threatened to not only shatter my life, but end it. 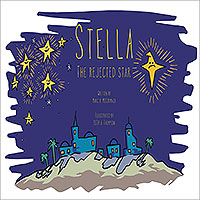 Marc McCormack’s “Stella the Rejected Star.” Stella wasn’t like all the other stars in the skies above Bethlehem. She was a four-pointed star in a five-pointed world, and the other stars teased her because of it. One December long ago, the stars heard an important event was about to happen. One of the stars would be chosen by God to lead the wisemen to the manger on Christmas. Oftentimes the ones considered different in the world are the ones who shine the brightest through their faith, hope, and love. 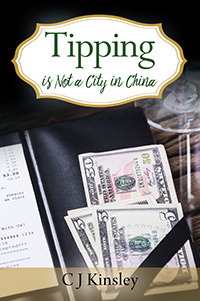 Tipping is Not a City in China

C J Kinsley’s “Tipping is Not a City in China” is a book about the tipping practices in today’s Food and Beverage Industry. Lots of information is given on how to tip and why.

Successful self-published authors know their odds of earning sales increase with every new format or buying method they offer to their readers. For you, that may mean making your print book available as an Audiobook! This November, Outskirts Press is offering 20% OFF Audiobook Publication and Distribution Down Payment — so you can have your book “road-ready” for a growing audience of literary audiophiles.

With your custom Audiobook, you’ll get your choice from among five narrator auditions and a 15-minute recording preview to make any last-minute adjustments to tone and pace for the final edition. Every custom Audiobook from Outskirts Press also includes:

Want to keep your book on-trend — and expand your revenue streams — by making your book available in Audiobook format? Simply enter promo code audiosave at checkout to save 20% and we’ll get to work on a professional Audiobook version of your book.

Publish your book with the Ultimate Black & White or Full-Color package today and we will give you 2-times as many authors copies PLUS publish & distribute your Amazon Kindle and Barnes & Noble NOOK eBook Editions absolutely FREE!

What does the #1 rated self-publisher offer that no one else does?

“This is the fourth novel I have published with Outskirts Press. The reason for that is simple — without question, they are the absolute best in the wilderness of independent publishers. The OP teams I have worked with are a great bunch of professionals who know their business exceedingly well and made this latest novel the absolute best it could be. None better.” —Andrew Ceroni, author of Special Means

Announcing the Self-Publishing News premiere of the book video trailer for Incomplete (published by Outskirts Press, November 2018), by Carleen Hennenfent.

Has a loss left you feeling lost?

There are quite a few books already out in the world concerning grief, so why do I feel the need to write another? First, over the 22 years of working in a funeral home and making grief home visits to over 3,000 families, I was gifted with multitudes of rich, inspirational stories. Many of these appear in my book, Incomplete. If they weren’t put into print, they would be gone. They are all true (names changed to protect privacy). Secondly, people wonder, “How do I deal with this unbelievably difficult loss?” Included are coping mechanisms. These need to be expressly stated. They ease the pain. And lastly, my grandchildren’s grandchildren may find themselves with loss. Devastating loss. Grief beyond belief. Perhaps they will pluck my book from the shelf, blow off the dust, and find just what they need to get back into life again.

Carleen Hennenfent, after receiving a Bachelor of Science degree in Mortuary Science from the University of Minnesota in Minneapolis, worked for Eastgate Funeral Service in Bismarck, ND, for 22 years. She developed the aftercare program which involved home visits to bereaved families and facilitating grief support groups. She was honored to be invited to speak to hundreds of groups, churches, long-term care facilities and universities, all in pursuit of grief education.