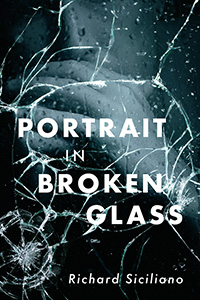 Richard Siciliano’s “Portrait in Broken Glass.” Joseph Curcio is an indifferent, homeless ex-alcoholic who once considered himself a progressive intellectual and the future mayor of his city. Now, he is staying in an abandoned cabin. While finding strength in a platonic friendship, he resolves to resurrect his career by writing an autobiographical journal in which he hopes to confront and understand his failures, his lost idealism and his past relationships. However, he is blind to the character flaws that were his undoing and will take him once again from the brink of success to tragedy. Sadly, his shards of guilt and regret are too sharp to touch.

Richard Siciliano is self-publishing a book with Outskirts Press, and he wants your help deciding his upcoming book cover.

Love and redemption intervened by violence and death.

This is the mosaic journal of Joseph Curcio, a homeless ex-alcoholic who once considered himself a progressive intellectual and the future mayor of his city. It is composed of fragments of memory, pieces of accomplishment, holes of loss, and shards of guilt and regret that are too sharp to touch. But in the isolated cabin of a woman who calls herself Amanda, Joseph believes that he has discovered the glue of insight, and that when he is able to hold the completed journal to the light he will see his reflection redeemed and his life will be restored. What he cannot see, however, are the character flaws that were his undoing and which take him once again from the brink of success to tragedy, violence, and death.

Richard Siciliano attended Washington and Lee University and worked with community action and social service agencies for many years. He writes about the ethos of his generation and lives in a small town in Northern California.