Gabriel F.W. Koch is self-publishing a book with Outskirts Press. And he wants your help deciding his book cover.

The year is 2554 and the world is coming to an end unless an impossible mission-through 600 years of time travel-succeeds.

Maternal instinct knows no boundaries, including the nano-neural-net intravenously installed in Dannia Weston’s mind to repress her identity, allowing her to perform a mission 300 years before her time.

Transported to the year 1954, Dannia becomes a woman with a mid-twentieth century persona, college educated with an aptitude for mechanical invention. Due to her work during the war, she is employed by the U.S. government on a secret project. But what no one knows-including Dannia or those who sent her back to tinker with the mechanical past to reduce future pollution-is what might happen should she become emotionally involved in 1954. The 2254 science team programmed the nano-net to prevent the possibility of pregnancy, but each person reacts to strong emotional stimuli differently, and using birth control not available in 1954 is out of the question. When Dannia falls in love with Peter Hersh and becomes pregnant, her hormones erode a small section of the nano-chained network that stabilizes her new identity, triggering a mild memory rebirth…and threatening her mission and the fate of the world.

Gabriel F.W. Koch is the 2004 winner of the L. Ron Hubbard Writers of the Future Award, as well as an award-winning photographer.

Please take a look at two possible covers below and then vote on the choice you recommend for Gabriel. 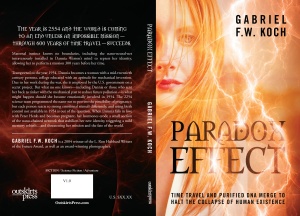 View all posts by Rob-Outskirts Press

One thought on “Author Poll: Writer Gabriel F.W. Koch wants your help with his cover”