Author Anton Venter is taking his latest book War of Dreams, on tour — a Virtual Book Tour with Outskirts Press. This will allow Anton to take his book into the far corners of the globe, all from the comfort of his own home! Keep an eye out for Anton’s book as he will be featured on several blogs over the weeks and months ahead!

Luckily for us, Anton was kind enough to answer a few questions as the tour was getting started so that we can give you a sneak peek into the mind of the creator of War of Dreams. 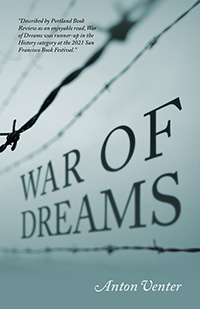 OP: Tell us a little bit about War of Dreams. What is it about?

Anton: The book tells the story of a German teenager who rapidly comes of age during the Second World War. Alexander’s involuntary participation in the War is interwoven with settings, plots and real characters (including Nazi officials) that are described in many historical WW2 books.

Anton: More has been written about the Nazi regime than about ordinary Germans and how the Second World War affected their lives. Many of their stories will never be told. Although fiction, Alexander’s story is told as he rapidly grows into adulthood and becomes an involuntary cog in the wheels of the Nazi machine.

Anton: I self-published with Outskirts Press.

Anton: The main character, albeit mostly in the background, features in World War Two plots and settings that were real and based on thorough research. The character’s development and early adult life follow a timeline that is accurately aligned with that of the Second World War.

Anton: I had much inspiration from dreams. I recorded my dreams over a period of fifteen years. Many of them were about a character in the context of a world war and I enjoyed weaving these dreams into factual WW2 settings and scenarios.

Anton: No, I currently do not.

Anton: I plan to publish a follow-up in which the same character will feature. The setting will be the Cold War that followed the Second World War. Again, it will be inspired by dreams that I have continued recording since publishing War of Dreams.

OP: Thanks for your time, Anton! We look forward to learning more about you as you visit other bloggers!

Anton Venter is a retired Information Technology professional doing freelance IT work in Cape Town, South Africa. He started writing as a hobby shortly before retiring and this is his first published novel.

For more information or to contact the author, visit https://www.outskirtspress.com/warofdreams