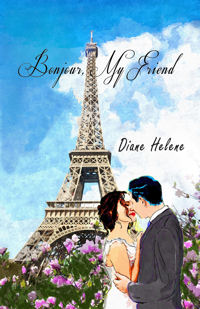 Diane Helene’s “Bonjour, My Friend.” Set in the glittering world of Parisian society, a young American girl is hired to sing at an upscale restaurant where she becomes the protégé of the owner, Andre, a wealthy French aristocrat. Andre’s best friend, Marcus, is a family-oriented man who shows Alycea there is life outside of Paris. After Alycea becomes severely injured during a storefront bombing, Andre vows to marry Alycea but Andre’s mother and sister join forces against the marriage.