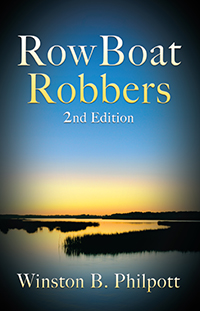 by Winston B. Philpott

Winston B. Philpott’s “RowBoat Robbers 2nd Edition.” As two teenage boys came out of high school, wondering what to do to make money and live, they came up with a plan. They would act as fishermen and row around the Bay and rob stores. They had a good living for a short while, until the Law began to close in on them. They served their time, came out of jail, fell in love, got married and began to raise a family. It became the best love story of its time.