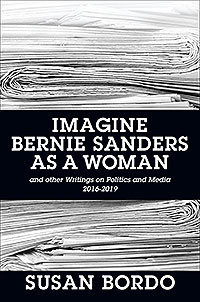 Imagine Bernie Sanders as a Woman: and other Writings on Politics and Media 2016-2019

Susan Bordo’s “Imagine Bernie Sanders as a Woman: And Other Writings on Politics and Media 2016-2019.” The months between the presidential election of 2016 and the summer of 2019 have been a wild ride: the unexpected results of the election, the discoveries of corruption and foreign influence on our democratic institutions, fresh assaults on governmental processes we hold dear and the negative influence of the mainstream media. Follow cultural historian and media critic Susan Bordo through those events and the beginnings of the 2020 primary contest through full-length published pieces in a voice that is bracingly honest as well as critically penetrating.