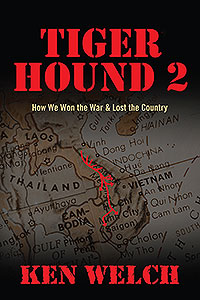 Tiger Hound 2: How We Won the War and Lost the Country

Ken Welch’s “Tiger Hound 2: How We Won the War and Lost the Country.” In 1963, communist insurgency was in it’s infancy. Then South Vietnam’s President was assassinated and its government was in turmoil. Soon, America found itself embroiled in war and secret wars. The enemy suffered horrible casualties but were handed victory.