Author B.A. Vonsik is taking his latest book Primeval Origins: Rise of Serpents (Book #3 in the Primeval Origins Epic Saga), on tour — a Virtual Book Tour with Outskirts Press. This will allow B.A. to take his book into the far corners of the globe, all from the comfort of his own home! Keep an eye out for B.A.’s book as he will be featured on several blogs over the weeks and months ahead!

Luckily for us, B.A. was kind enough to answer a few questions as the tour was getting started so that we can give you a sneak peek into the mind of the creator of Primeval Origins: Rise of Serpents (Book #3 in the Primeval Origins Epic Saga). 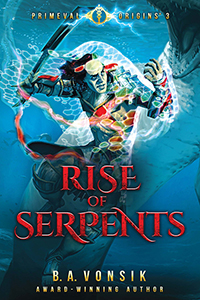 B.A.: A Science Fantasy tale revealing mankind’s origins and the creation of the Four Horsemen of humanity’s final judgment. Experienced through the eyes and mind of Nikki, a paleo-archeologist graduate student, whose life is turned upside down during a field expedition and is now on the run with an enigmatic group of companions fleeing and seeking refuge from the relentless and deadly forces of humanity and their guiding masters known from our shrouded deep past, answering the question…”What if all our myths and legends are true?”

B.A.: Curious about the similarities between our many myths and legends, I embarked on a three decades long study of our mythological tales, ancient characters and creatures of legends, and our many religions. I discovered the similarities were indeed real, building a common story of mankind’s origins rich in interactions with our mythological gods as living alien beings…also being known to us as the fallen angels…the Watchers of the Bible and Qur’an. I wanted to provide to the curious an integrated story of our conceivable past and origins in what has become known as Ancient Alien Theory in a story told through a unique perspective filled with thought-provoking characters and creatures and events discovering the meaning and purpose of our mortal lives and the nature of our human souls.

B.A.: Self-published through my company Celestial Fury Publishing. The complete story will be told through the main storyline of the published books of the Primeval Origins Epic Saga, with supplementary tales published through an in-development role-playing game. Planned are releases of the story in different formats to reach fans of all ilk’s. Formats planned include: Audio books, graphics novels, and the role-playing game both pen-and-paper and then as a computer game series.

B.A.: A very interesting story with characters you will love and those you will love to hate that will end in the Book of Revelations. Books #1 (Paths of Anguish) and #2 (Light of Honor) have already won 16 awards and honors between them.

Early reviews of Rise of Serpents are even stronger than those received by Paths of Anguish and Light of Honor. Things are looking good for more awards and honors blessing the Primeval Origins Epic Saga. Each book is written to allow readers to enjoy the book and become new fans without the need to read the previous books. Difficult to do, but successful so far.

B.A.: I know of no other books…or stories integrating all our major myths and legends spanning 65 million years, our religious stories and accounts, all the disciplines of the sciences, engineering and emerging technologies of the 21st century, and our contemporary human history into one tale of mystery in a Science Fantasy “What if…” setting, exploring the our morality and existence.

B.A.: Book #4 of the Primeval Origins Epic Saga is in the works, as is the master rule book for the role-playing game. Please visit the Primeval Origins website at www.primevalorigns.com for more information on all of the above, the encyclopedia and lexicon, the happenings and research blog, and the research source reference material. For the curious, you will be able to spend months, even years going through all the available material…or you can just enjoy the compelling multiple award-winning story filled with terrible tyrannies, deadly dinosaurs, brutal beasts, ancient gods, and heroic hearts of our undiscovered history and the telling of our End Times.

OP: Thanks for your time, B.A.! We look forward to learning more about you as you visit other bloggers! 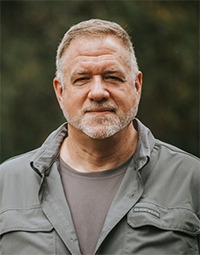 Multiple award-winning B.A. Vonsik graduated from the United States Air Force Academy and served as an USAF Special Operations aviator. Currently, B.A. Vonsik works in the training and simulation industry by day while at night and all other times detailing the world of Primeval Origins with new discoveries and research in ancient mythologies, creation myths, religions, sciences and technologies. Starting with a curiosity about why many of our mythologic pantheons seemed very similar, B.A. created the Primeval Origins story based on more than 25 years of research integrating our mythologies, ancient alien theory, history, the sciences, and with the stories of the Bible, Qur’an, and Hindu religions. B.A. Vonsik lives with his extraordinary wife in Florida.

For more information and to purchase or to contact the author, visit https://www.outskirtspress.com/primevalorigins_riseofserpents