Congratulations to John E. Peltier, author of The Thundering Herd, who is our third and final competitor for the Outskirts Press 2017 Best Book of the Year Award. It’s time for you, the voter, to take it from here!

Public voting will determine which of the three finalists — Gramma Darling by Lissa Schroeder, When a Woman Is in Love with God by Darnelle Wilson, or The Thundering Herd by John Peltier — should be awarded the Outskirts Press 2017 Best Book of the Year award and its $1,500 Grand Prize. Voting is open to everyone and will take place on this blog from Monday, Sept. 11 through Friday, Sept. 15 (noon Mountain time).

John’s memoir, The Thundering Herd, was published April 2016 and won a 2nd Place EVVY Award in the History category just a couple of weeks ago. This touching historical memoir recounts a big family’s life in the 1950s and ’60s on a Texas farm and cattle ranch with the Vietnam War looming on the backdrop. 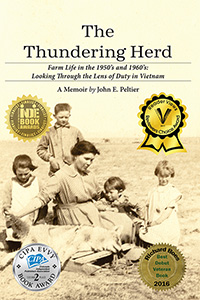 These stories begin with brief family histories that bring the Peltier and the Scottish Keillor families together. John was the fifth of the twelve children that Wilburn and Barbara Peltier raised on the flat salt grass prairie of Southeast Texas. The life they created for their family on their rice farm and cattle ranch provided a fertile field for the life experiences that are shared in these settings. At the age of nineteen, naïve and fresh from the farm, John was drafted into the U.S. Army. After surviving boot camp and medical corpsman training, he found himself in Vietnam. John used his time in the military and its experiences as the backdrop to describe life growing up.

Writing this book intensified the realization of the valuable life lessons that John’s family and the farm and ranch taught him. After mustering out of the Army in January of 1969, he settled back into civilian life and finished his education. Disaster struck in August 1969 when his father suddenly died of a heart attack at the age of 54, leaving five of his siblings still at home and all without a father. He discovered the two earthy loves of his life – his wife, Janie, and the vocation of construction – at the same time and place. As a result, Janie and John have a beautiful family and a thriving business, Peltier Brothers Construction, which has provided a great livelihood not only for him and four of his brothers, but for nephews down into the next generation. Both Janie and the company taught him lessons he never expected to learn. Those stories, plus an incident with the fangs of a deadly rattlesnake and a light essay on grass and water, are included in this book. 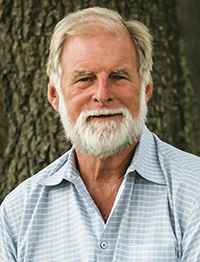 John E. Peltier is now retired from a successful career in construction and lives in Tomball, Texas, with his wife, Janie. He is the father of three and grandfather to eight. He still raises cattle and gives much back to his community. Sam Houston State University recognized him as one of their 2015 distinguished alumni.

As finalists, Gramma Darling by Lissa Schroeder, When a Woman Is in Love with God by Darnelle Wilson, and The Thundering Herd by John Peltier, will be competing for the ultimate win. The winning author will receive a $1,500 credit to his or her Outskirts Press Publishing Center, plus an exclusive 2017 Best Book of the Year award seal to apply to the cover of their book.

So, come back on Monday, Sept. 11, to cast your vote for the book you believe to be the best of the three.

Are you ready to publish your own award-winning book and perhaps find yourself in the running for next year’s Best Book of the Year award?