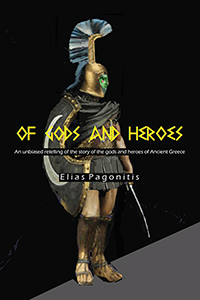 Elias Pagonitis’s “Of Gods and Heroes: An Unbiased Retelling of the Story of the Gods and Heroes of Ancient Greece” is an unsanitized account of being a gay warrior in ancient Greece. Inspired by Joseph Campbell and modeling Asopichos on both Luke Skywalker from Star Wars and Neo from The Matrix, Pagonitis has written a book for every reader who, like Pagonitis, has suffered from the devastating, horrific effects of homophobia. Taking on us a whirlwind ride from his simple boyhood on shores of Lake Helikē to his initiation as a warrior-lover in the Sacred Band, Asopichos had a great victory over the Spartans at Leuctra and his awakening to ultimate reality.