Luckily for us, Robert was kind enough to answer a few questions as the tour was getting started so that we can give you a sneak peek into the mind of the creator of A Trail of Many Tales: The Discovery of the Fish Lake Cutoff on the Old Spanish Trail. 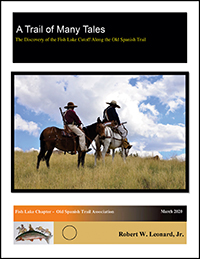 OP: Tell us a little bit about A Trail of Many Tales: The Discovery of the Fish Lake Cutoff Along the Old Spanish Trail. What is it about?

Robert: The Old Spanish Trail is one of 22 National Historic Trails in the United States. From our studies we found that the trail began in the late 1700’s as a Spanish slave and trade route from Santa Fe, NM to the central Utah area. By 1829, the trail was pushed into southern California and carried commerce back and forth from New Mexico to Los Angeles. The book centers on the archaeological discovery of a cutoff trail from Interstate 70, east of Salina, Utah back to the main branch at Junction, Utah. The path saved only 22 miles but took travelers past Fish Lake with its abundant fisheries resource and foraging areas, a much-needed reprise from the deserts of eastern Utah and the looming presence of the Mojave Desert to the west. The book uses historical documentation, tribal lore, archaeological surveys and excavations, and state-of-art scientific methods to define this 72-mile shortcut.

Robert: The last nine years of my 38-year career as the Fishlake National Forest archaeologist were invested in identifying the Fish Lake Cutoff. Because the project had been funded by the American taxpayer, I felt an obligation to formally report the findings of this effort. In doing so, we were able fill in some of the many blanks in the history of Utah dealing with the late 18th and early 19th centuries.

Robert: Due to U.S. Forest Service regulations, the book was unable to be published by the agency. Instead, I self-published using Outskirts Press, Inc.

Robert: The book will appeal to people not only interested in western history but to those folks who are fascinated by the detective side of archaeology. A Trail of Many Tales was accomplished using the expertise of many people from livestock handlers to the LIDAR technicians circling the cutoff in an aircraft. Every tool in the chest was used to solve this perplexing challenge of tracing a heavily used corridor that, on the surface, did not leave a lot of obvious evidence. In the end, the vestiges of the trail were overwhelming.

Robert: In A Trail of Many Tales, we, beyond doubt, identify the trail once traversed by small groups of travelers, mule trains from New Mexico, and the return from California of hundreds to thousands of horses and mules. Herding techniques were examined and we were surprised to learn that a thousand head of stock could be managed by only 15 to 20 drovers.

Robert: There is only one somewhat specific article about travel on the cutoff. This is a firsthand account by Lt. George Brewerton (USA) who traveled with Kit Carson in 1848 from Los Angeles to New Mexico on the Old Spanish Trail. Known only as the “trail to California,” the young lieutenant wrote about a series of isolated events and locations while on a journey across what would be later called the Fish Lake Cutoff. He notes finding a stream feeding Fish Lake where the men of the party waded in and threw hundreds of spawning fish onto the shore. Brewerton also details finding the remains of seven individuals from Arkansas that had been killed by the Ute Indians in a “gorge” near the lake. In my book, we identify not only the location of these events but most every lineal foot of this trail which followed inscriptions, blazes, cairns, swales, trade goods and subsurface traces of sporormiella, a fungus spore associated with livestock dung. During the investigation, we also noted that the “trail” was actually a travel corridor measuring 50 feet in width to over a thousand feet.

Robert: I have written hundreds of archaeological reports and management plans but never published a book.

Robert: No. In retirement, I plan on revisiting the significant archaeological sites that I never had the time to record when employed and assigned to different project areas. For example, pithouses a thousand years old, a possible Fremont solstice site, a maybe Old Spanish Trail layover camp, and an intriguing tree blaze that may have been left by Jedediah Smith.

OP: Thanks for your time, Robert! We look forward to learning more about you as you visit other bloggers! 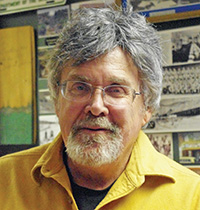 Bob Leonard was born into a military family and had the opportunity to travel the world from Heidelberg, Germany to Ft. Carson, Colorado and became a history buff at the side of his dad, a U.S. Army officer. Trips to Pompeii, Rome, Stonehenge and the like were vacations during the family’s six year tour of duty in Europe. Bob attended Clarke Memorial College, Louisiana College and Colorado State University between 1968 and 1975 majoring in history, anthropology and archaeology. At Colorado State, Bob found and excavated the long-lost ice house at Bent’s Old Fort on the Mountain Branch of the Santa Fe Trail. After graduate school, he became a Park Ranger at Mesa Verde NP in Colorado. In 1980, he accepted the Forest Archaeologist position on the Fishlake NF in south central Utah. During his 40 year career, Bob was named the Intermountain Region Archaeologist of the Year twice, received the National Interpreter of the Year award, was given the Citizen of the Year Award by Utah State Parks and was the recipient of a Certificate of Merit for his work on the Old Spanish Trail. Bob retired from the Forest Service in 2017 and now lives in Marysvale Utah, a stone’s throw from the Old Spanish Trail.

For more information or to contact the author, visit https://www.outskirtspress.com/trailofmanytales