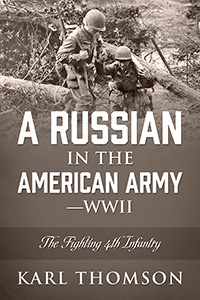 A Russian in the American Army – WWII: The Fighting 4th Infantry

Karl Thomson’s “A Russian in the American Army – WWII: The Fighting 4th Infantry.” This is the story of a young Russian boy brought to the United states in the early 1930’s. He came to love and embrace the U.S. as his home. As soon as he could, he joined the Mighty Fighting 4th U.S. infantry. In the Army he showed great promise. He landed on Utah Beach on D-day and continued fighting across France leading his men until the war’s end. Commanders put him into Army Intelligence. Sometimes bypassing the chain of command, he studied the battlefields and acted instinctively. He did not always wait for orders from above and made daring advances against German troops. He felt he understood the enemy. Throughout the war and beyond, Alex proved himself to be one of the smartest and most thorough fighters and intelligence figures among U.S. specialists.