Author Poll: Glenn Ickler Wants Your Help With His Cover

Glenn Ickler is self-publishing a book with Outskirts Press, and he wants your help deciding his upcoming book cover.

Louie Stein has a story to tell—a story so special that Louie believes newspaper reporter Warren “Mitch” Mitchell will want to write a story about the story for the St. Paul Daily Dispatch. Mitch and his photographer buddy, Alan Jeffrey, are vacationing with their wives, Martha Todd and Carol Jeffrey, in the historic little town of Jonesborough, Tennessee, where they are attending the annual National Storytelling Festival. The foursome has been lured to the festival by Louie Stein, an 82-year-old master storyteller from southern Minnesota. They are waiting in eager anticipation for Louie’s special story in one of the festival’s huge tents on Sunday afternoon when the audience is told that, “due to circumstances beyond our control,” Louie will not be appearing. The two couples hurry out of the tent and rush to Louie’s motorhome, where they had joined a group of storytellers at a party the previous evening. To their astonishment, the vehicle is surrounded by yellow police tape, and Al is recruited by the police to enter the motorhome and photograph the bloody body of Louie Stein, who has been slashed and stabbed during the night. A week later, another storyteller, who calls herself Thumbelina, says in her blog that she thinks she knows who killed Louie. Hours later, Thumbelina is also fatally slashed and stabbed, and Mitch and Al find themselves on the trail of a shadowy two-time killer.

Glenn Ickler has had a long career in newspapers as a reporter, feature writer, theater critic, columnist and editor in Minnesota and Massachusetts. He was the leader of an editorial page staff that was nominated for a Pulitzer Prize and has won numerous awards for his writing. A native of Minnesota, he now resides in the tiny town of Hopedale, Massachusetts, somewhere west of Boston, and spends the summer months in a tiny cottage on the tiny island of Martha’s Vineyard. 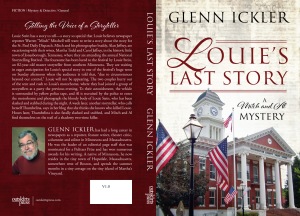