Outskirts Press Bestseller ‘The Rooftop Christmas Tree’ is a Movie!

Has 2016 been a rough year? Many psychologists and clinical researchers report increased levels of stress and anxiety around the holiday season, and for many of our readers this has been a year for the books. And so, it is with great happiness and a fair bit of pride that we introduce you to Landria Onkka, one of Outskirts Press’ award-winning authors, and her book The Rooftop Christmas Tree, a story to reinvest the world with a little joy and magic.

And the good news doesn’t end there! The television rights to this book, originally released back in 2014, were immediately snapped up and the resulting adaptation will air for the first time just after Thanksgiving on the UP Entertainment Worldwide Network (at 7PM and 9PM Eastern Time on November 27th, 9PM on November 29th, and again at 1AM on November 30th). It has quite the star-studded cast and crew! Directed by award-winning Director/Producer David Winning, produced by Oliver De Caigny, and starring Michelle Morgan and Stephen Huszar in its leading roles, this movie is sure to thaw the cold of winter and warm the cockles of your heart as the beautiful story of Onkka’s book takes the silver screen by storm. 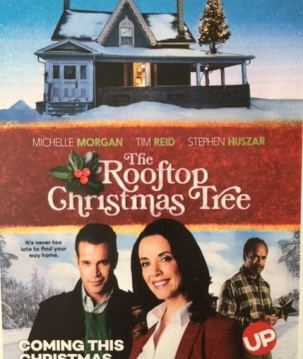 The Rooftop Christmas Tree is more than just a holiday story—it’s a human story. Sarah Wright, a small-town attorney in Rosedale, Georgia, has an affinity for animals and a passion for helping the poor. She has found meaning and peace in her life, a peace that is made fragile by the return of her childhood friend John Rivera to Rosedale, now a high-powered corporate attorney. Unable to forgive John for his abrupt departure years earlier, Sarah finds herself at odds with him at every turn, and must deal with romantic feelings she long thought suppressed.

Meanwhile, a former neighbor is making trouble around town—as usual. Mr. Landis, a pugnacious Rosedale institution, hauls a lit Christmas tree out every Christmas … and places it on his roof. Nobody knows why, but he has carried on this tradition for years, landing him in court—and jail—each and every time. When he refuses her help, Sarah finds herself unable to prevent what she knows will be his next infraction, and the judge on the case assigns the case to both young attorneys, forcing them to work together and figure out a way through their complicated history.

Inspired by real events, author Landria Onkka has produced a work which Christine Watson of Reader Views calls “delightful” and describes as “bring[ing] to life the joy that is associated with the holidays as well as a budding new romance.” This is a book, she writes, which “is best enjoyed while curled up under a blanket with some hot chocolate”—and the television movie adaptation is predicted to produce exactly the same joy and comfort in its readers. Onkka herself reports, after an advance preview that Director David Winning has done “an outstanding job” and that the actors are “first class!”

So make sure to tune in on November 27th, 29th, or 30th for this special holiday treat! For more information about both book and movie, check out Landria Onkka’s personal website at www.landriaonkka.com. If you’re the sort of person who likes to read the book before you see the movie, you can purchase her book through the Outskirts Press Bookstore, or through the book’s Amazon listing. There’s nothing quite like a good movie to make us forget some of the holiday stress, and give us a boost of hope and energy to tackle whatever 2017 has to offer!