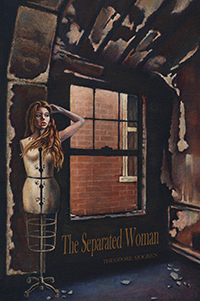 Theodore Sjogren’s “The Separated Woman.” In one single 54,000-word sentence, The Separated Woman gives new significance to the phrase “stream of consciousness,” demonstrating what it means to be fully immersed in a work of fiction. The intensity of this immersion is crystallized by its brutal simplicity as the novel reveals the mind of one man—possibly a serial murderer—talking to a detective in a late-night café. In metaphysical moodiness it rivals Kafka’s The Trial and in existential grit outdoes Camus’ The Stranger. This engrossing and challenging read is not for the fainthearted. From deep within the nature of the world we live in, Sjogren takes his mystery/thriller into a bare, penetrating exploration by way of a single, thought-defying sentence.