Whether we care to admit it or not, we are influenced by others in our purchase decisions. We ask friends for recommendations. We read product reviews. We think twice about buying something that has earned a meager 3/5 stars.

Likewise, positive buzz is priceless. In fact, word of mouth is one of the most powerful marketing tools any business can have, including the self-publishing business. That’s why book awards—positive word of mouth from experts in the field—are so much more than a pat on the back for an author. Awards are also an underutilized marketing tool with benefits that go well beyond the warm-fuzzies that come with positive recognition.

Here are five ways book awards can benefit self-publishing authors like you:

Win or no win, book competitions get your title in front of savvy literary professionals and eager readers.

Feel like you have a potential award-winner in your hands? Let Outskirts Press get you submitted to book competitions so you can compete for prestigious titles and prizes.

Marketing. It can cause more trepidation in writers than the looming task of writing itself. Thankfully, Outskirts Press can take some of the burden of marketing off your shoulders, so you can focus on writing while we focus on promoting your book and increasing your readership! Here is an overview of our most popular Marketing Options, based on the latest survey of sales numbers.

We would like to thank the many authors who have trusted us to assist them in marketing their way toward successful books — and we’d love to help you, too!

Upward Bright is a life development initiative to show and remind each person that inspiration is rooted in and around you.

There Is a Lantern In Every Heart

Wherever you are in life, this book is a resource for you. There Is a Lantern in Every Heart is the first in a series written by the Upward Bright™ life development initiative, to show and remind each person that inspiration is rooted in and around you. This book offers you words and photos to which you could return anytime and as often as you’d like, especially to feel uplifted, refreshed, understood, and reconnected with yourself, people, nature, and life in general. There Is a Lantern in Every Heart centers around the human experience and relates to all. Each time you read this book, new insights and feelings of possibility could emerge for you.

Harold Phifer was born and raised in Columbus, Mississippi. All of his first 25 years were solidly spent inside his home state. After graduating from Mississippi State University and Jackson State University, he went on to work for the Federal Aviation Administration (FAA) for 23 years as an Air Traffic Controller. He eventually left the FAA and began work as an international contractor where he has done numerous tours in Iraq and Afghanistan.

Sleep Walking Out of Afghanistan: Walking It All Back 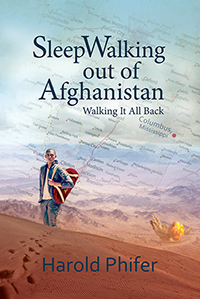 I found myself caught in the middle of the biggest vehicle explosion to ever hit Afghanistan. While dealing with injuries and destruction my mind kept spinning out of control from horror to horror to my dysfunctional past. I did my best to replay my personal ordeals and the reactions of the people around me as accurately as possible. The journey starts out in a tropical country of Thailand where I was living a carefree life with no worries or drama. By happenstance I came across another retiree (Dylan) that took advantage of my drunken state while easily coercing me to dive into my life’s history. It was a life that I buried deep below the surface away from my kids, my family, my friends, my co-workers, and mainly myself. Each story is sure to affect you differently than the previous one. Dealing with what I had viewed as an imminent death helped to bring closure to where I was once open and exposed. The book touches on the sad, the shocking, and the schizophrenic behaviors that surrounded me until later into my adulthood. I tried to ratchet down those experiences with my sense of humor and creative out-takes. You are guaranteed to read this book over and over again! You may find yourself identifying with many of the events or characters. But undoubtedly, some of the stories will stick with you like nothing you have ever read or ever heard of before.

What happens behind closed doors truly is only known by the ones behind those doors. My story, I’m sure, is the same as many others, yet known by very few. My quiet, mid-western life in small town, USA, now consists solely of peace, happiness and true love, thanks to my wonderful family and the few friends I have left. 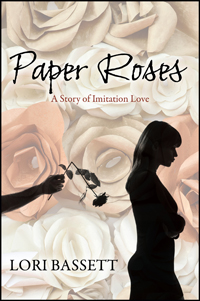 Growing up we learn that there is no such thing as the boogie man. We learn that shadows will not hurt us. We learn not to be afraid of the dark. We learn not to talk to strangers. We spend years looking under the bed and in the closet, just to see there really are no monsters there. We also learn that love is a good thing. Love brings us together. Love protects us. Love is where we want to be. Sadly, we also learn, not everyone is taught the same way. Sometimes all those demons do exist and sometimes hearing “I love you” should make you turn around and run away.

Shannon L. Kollmeyer has a lifelong passion for hunting and adventure. Who would have thought? — a mild-mannered real estate and banking guy goes out and “lives on the edge.” He knows hunting. He’s lived it, having stalked game in all of the Western United States, Canada (including the Arctic Ocean), New Zealand, and Africa. He has collected over 50 animals with rifle and bow that qualify for the major record books of trophy animals. Shannon graduated in economics from Washington State University and earned an MBA from cross state rival, University of Washington. He and his wife, Cris, live in Chelan, Washington. They have two grown children, Aaron and Kelly.

Living on the Edge 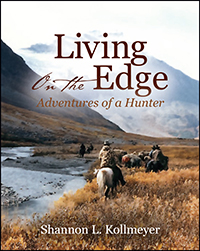 Untamed wilderness, nasty terrain, daunting conditions, over 50 species — experience it all in one man’s lifetime hunting passion. No braggadocio — just solid stories that show the hard work, research, planning, practice, patience, and perseverance that makes for good hunting. Shannon Kollmeyer is your guide through this spectrum of hunts in four countries, 20 locations, various geographies, different cultures, and every type of terrain and weather imaginable. Follow the author’s footsteps across the Yukon wilderness, the Canadian Arctic, Alaska, the United States, Africa, and New Zealand. Hunt polar bears near the North Pole, 80 miles out on Arctic Ocean ice, traveling by dogsled and surviving bitter cold. Scale almost vertical mountain stream beds pursuing Dall sheep. Stalk giant Alaskan brown bears — on foot. Successfully hunt caribou, moose, grizzly bear, wolverine, and wolves in the Canadian Arctic. Enjoy hunts for wild sheep, mountain lions, mountain goats, deer, elk, and moose in North America, plus Himalayan tahr and chamois in New Zealand’s Southern Alps. Chilling, authoritative daily accounts of hunting four of the most dangerous killers in Africa will give you goose bumps. The author and his wife escape the charge of an enraged, screaming, wounded elephant, they stalk a silent killer leopard in pure darkness, and survive a stampeding herd of cranky Cape buffalo. The North American Model of wildlife conservation is unique in the world and incorporates the role of hunting as the dominant reason North America’s rich wildlife resources have been sustained for all to enjoy.

International book fairs bring books, authors, readers and publishing professionals together under one roof and offer fabulous opportunities for authors to promote to a huge, relevant audience. It’s a chance for authors to network, grow their fan base, increase book sales and expand their selling opportunities into new territories.

The 25th annual Beijing International Book Fair (BIBF) takes place August 22-26 at the China International Exhibition Center. Thousands of authors from around the world gather annually at the fair — one of the largest and most prominent events of it’s kind in the world — to display their work and make valuable connections. Tens of thousands of fans and literary players will be watching when it all goes down. It’s a one-of-a-kind opportunity to mix, mingle and network with booksellers, publishers, agents and other industry professionals on the lookout for fresh talent and compelling new books.

Outskirts Press has attended the BIBF for many years, advocating for participating authors with a prominent display of their books, vital information and outreach to valuable connections we’ve cultivated with regular fairgoers. Could this be you? Don’t let the language barrier stop you; China is a hot market!

No other country has experienced the growth in the world marketplace that China has in recent years, and that growth extends to publishing and bookselling. Blossoming readership in China represents an enormous opportunity for book translations from American authors and publishers are scrambling to feed the frenzy.

There is surging consumer demand for all types of books, so getting yours in front of this potential market can have a huge effect on the success of your book. Obviously, it is too late to participate in the 2018 BIBF, but you can spend the intervening months getting ready for next year’s bigger, better Beijing to-do!

Want to reach the huge audiences at the 2019 Beijing International Book Fair, or another high-profile event? Include book fairs in your book marketing plan and marketing calendar so you never miss a deadline. An Outskirts Press Personal Marketing Assistant can help you get ready for this and other important promotional opportunities.